Alone in the Kitchen with an Eggplant and a Bird

As a potter, I appreciate the eggplant. It is perfect in its imperfection, the curves are exquisite. If I could ever make a lid as pleasing as the leafy bit at the stem end, I would be satisfied. The skin of any eggplant has the features of a perfect glaze. Not too matt, not too glossy, it is “buttery” to the touch. The whole object is in balance and harmony. Don’t even get me started on the range of colors to be found in the eggplant palette.

But unlike my food writer idol, Laurie Colwin, I have never been the culinary eggplant’s greatest fan. Laurie’s essay, “Alone in the kitchen with an eggplant,” is probably my favorite piece of food writing. It epitomizes what was great about Laurie, about food writing, and what I hoped would be great about eggplant. But like the other things I’m supposed to like but don’t (these are my own rules), I tried and failed many times. Oh, the other things are: Bob Dylan, Joni Mitchell, anchovies, most cheeses made from the milk of sheep, and caviar.

Of course, a really gooey eggplant parm or chinese eggplant with pork can be yummy, but seriously. Can you digest that and feel well? I can’t. Otherwise, no matter what I did, I found eggplant to be spongy, bitter, and completely lacking in charm. So, I concluded that Laurie’s favorite vegetable is only good in the presence of a quantity of fat that is out of my culinary league. 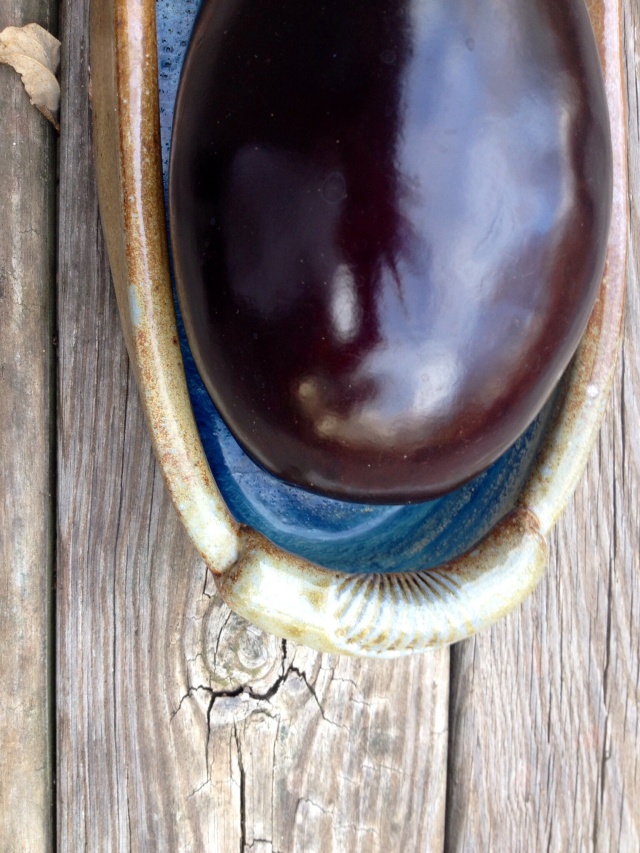 Until Wendy suggested I put a cubed eggplant under the turkey. She shut me up when I started protesting and complaining. She knows me so well. She said it was just for the purposes of gravy making and that I wouldn’t even be eating the offending vegetable. So, I threw the chunks in the bottom of the roasting pan, along with some leeks (Wendy and I are both big fans of the leek), and proceeded to make the best gravy I’ve ever eaten. If you want my gravy making tutorial, leave me a comment (it’s easy, it’s fun!).

I tasted one of the pieces of eggplant before I started the gravy. It was a revelation! Roasty, toasty, silky, infused with chickeny goodness, I could have eaten all of it and had none left for the all-important gravy (my family puts a great deal of stock in gravy—pun intended). This probably happened ten years ago. Since then, I’ve never failed to put eggplant under my turkey. But until recently, I didn’t think much more about it.

Then I had a bumper crop of eggplant. We were apple picking at Ochs, there were many beautiful specimens and that potter thing took over. I just couldn’t resist the little darlings. Once I got them home, I needed to figure out what to do with them. So, I thought about the poultry incident and I invented Moussakasagna. This is a dish, invented by me, involving ground turkey made into a tomato meat sauce, layered with roasted eggplant, white sauce, and cheese. I know, it’s a cultural abomination, but it sure is delicious.

Flush with the success of another eggplant/bird combo, I tried throwing roasted eggplant into a pot of turkey chili to great effect. Just toss chunks of eggplant with a little oil, salt and pepper and roast until nice and soft. Then toss into your pot of chili. Cook for a half hour or so to get everything friendly. I imagine this would be good with beef chili, too, but around here, we tend toward turkey. The aforementioned moussaka bastardization would probably be good with beef or lamb, too, but then it wouldn’t include a bird now, would it?

My most recent eggplant/bird experiment involved a nice Bell and Evans chicken brought home to me by my kind husband from Whole Foods. He gets out of Warwick sometimes and finds these things for us. So nice. I prepped the chicken as my other guru, Judy Rodgers, taught me (all these dead gurus). A day before cooking, I seasoned it with sea salt and pepper and then let it sit, uncovered overnight so the skin would dry a bit (this helps with crisping, always desirable). I chunked up a big eggplant and a couple of sweet potatoes and tossed them with a little oil, salt and pepper. Now, this is is little fussy, but indulge me here. I roasted in a 12 inch skillet. And I put the eggplant pieces under the chicken, the sweet potato pieces around the perimeter so they would caramelize more. I roasted the chicken upside down for ½ hour at 375° convection. And then I moved the veggies around a little, turned the chicken, and roasted for another ½ hour. I took out the chicken and put it on a plate, let it rest for a few minutes before carving, popped the pan back into the oven to cook a bit more while I put the rest of the meal together.

The rest of the meal was an arugula salad with lemon, olive oil, shaved parm and freshly ground pink sea salt (a gift from Karen, so wonderful) and pepper, some sliced tomato, and my home baked sourdough.

It seems that this poultry arrangement was the “gateway” to a new attitude about eggplant. Maybe I could be alone with one? Here are the things I think I’ve learned about cooking these smooth beauties:

1. Make sure you cook them fully. An undercooked piece of eggplant is not pleasant.
2. I like roasting best.
3. Plenty of salt is important.
4. Seasonings that work well: smoked paprika, sesame, thyme, cayenne, ginger.
5. Roasting and then adding to a stew or sauce is good.

I doubt I will ever make a big dish of eggplant for myself when no one else is home. I’m more of an eggplant-for-a crowd woman now. But I have overcome my aversion and for that I am grateful and proud.

Here are some friends who are proud of me. I invited them over to keep me company in the kitchen with my eggplant and poultry, but they were happy out in the pasture. 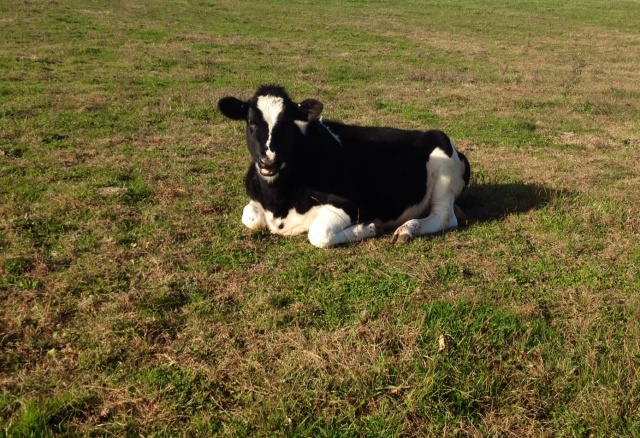